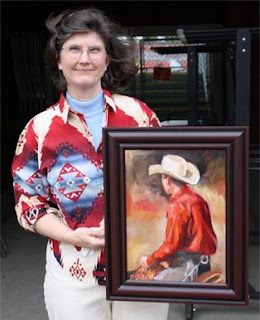 The photo at the top of this entry is the quick draw painting I produced in one hour. I had someone shoot me holding the painting so I'd have a record of what I did, then ran into take my place in line. It was 16 x 12 oil on canvas. Needless to say the painting was not as complete as I would have liked, and the pressure was huge, but I had so much fun, that I will certainly participate in a quick draw event any chance I get.
Posted by Karen McClelland at 9:27 AM