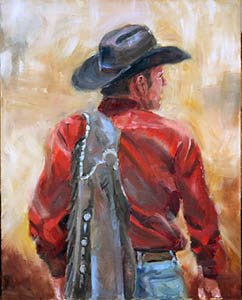 I've been very negligent in posting my recent work -- painting like mad, but just not getting it posted. So I'll try a bit of catch up here.

I am currently working on 10 - 15 western themed paintings that I plan to have done by September. Being a figurative painter it is not the western landscapes that appeal to me, but the animals and people of the west -- both modern and of times past.

My camera and I have been at western horse shows in the past couple of months (and a wonderful pow wow last weekend, but more about that later). So I'll share some of the cowboys I've been painting recently.

This fellow was at a show in his black shirt, black jeans, black chaps, everything crisp and pristine. I wanted him to look more like he stepped out of a western rather than out of a horse show. So I livened (and dirtied) him up a bit.

As you've often seen in my work, I'm drawn to where people are going, with the body language as the focal point rather than the face. So here is my first cowboy for your viewing pleasure. I realized after taking the photo, I've yet to sign him, so I'll get that done later today. This still untitled cowboy is for sale. It is an original oil painting 20" x 16" on canvas. Until at least September when the collection is complete this painting is available through me directly. Please email me if you are interested. klm (at) kmdogart.com
Posted by Karen McClelland at 9:23 AM No comments: